ON5RZ/Raf and his brother in law Bert arrives to Sundsvall on Friday. They were warmly welcome to Sundsvall by SM3JOS/René and his XYL Kerstin. They had dinner and stayed over the night with René and Kerstin.

On Saturday it was "Ice fishing" on a lake outside Sundsvall and on Saturday night they visited “Fjällräven Arena” in Örnsköldsvik where the Swedish Television arranges “Melodifestivalen”, the Swedish selection for the Eurovision Song Contest.

The boys visited the city of Östersund to see how it look likes in the winter and in the afternoon they travelled around in Ragunda.

On Monday morning the boys made a stop and have coffee on the SM3FJF Jørgen's work in Sundsvall's Centre. Then they travelled to Stockholm for the afternoon fly back to Belgium. 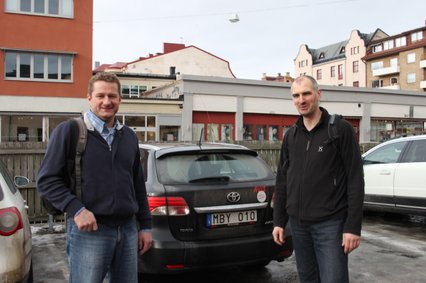