Work in the evening at SI9AM

In the afternoon SM3BQC/Arne, SM3EFS/Lennart and SM3FJF/Jörgen travel from Sundsvall to Utanede.The aim is to make a rough plan for the work in autumn, when the Spiderbeam should be mounted. They checked the place for the antenna. SM3EFS/Lennart install 3G Internet. We have received fabric from Thailand and we have sewed a curtain. The curtain has now been hanged in front of the bunk bed.

Preplanning had been going on for several months, and July 14 was the big day "D" as in Diggiloo.

Early Saturday morning, July 14, radio amateurs from the associated radio clubs in Östersund, Hudiksvall, Sundsvall and Sollefteå went to Utanede. From Sundsvall SM3MEH/Tomas and SA3AWT/Pelle travelled with Sundsvall Club MRC trolley. (MRC = Mobile Radio Central). SA3CAC/Andreas brought a horse trailer and inside was a small tractor with a trailer. An extremely important resource when it comes to transport both materials and hams to the three large parking areas.

At 09:00 am most radio amateurs were in place in Utanede. During the day, there were 52 hams who worked with different things during the liaison mission. A food tent was mounted and the parking areas were marked. SM3SZW/Sven-Henrik was the general for this day and did the job brilliantly!

It had been raining a lot before this day and when it started to rain again we realized that we probably should get big problems when all cars should leave the parking areas. We then took the decision to order gravel and a tractor that could go out with 35 ton gravel to strengthen the entrances and exits to parking areas.

At 07:00 pm  900 cars was parked on parking areas and Diggiloo show could begin as planned. 4000 people was seated in front of the built-up Diggiloo scene.

At 10:30 pm the show ended and the parking areas were emptied in about 50 minutes and we could dismount the food tents and remove all signs and marker bands that were placed to mark the parking spaces.

Big thanks to everyone who helped us this day.

On July 19, 1897, King Chulalongkorn of Siam (present-day Thailand) visited Sweden and Ragunda municipality. He had got an invitation from the Swedish/Norwegian King Oscar II to the International Art and Industry Fair in Stockholm and he accepted.

King Oscar II knew that king Chulalongkorn of Siam was interested to see the Swedish sawmill industry, he chose the middle part of northern Sweden. There was beautiful scenery with bright summer nights and impressive waterfalls. King Chulalongkorn was also interested in the modern Swedish traffic, both on water and on land.

In the middle of 1992, a Thai folk-dancing troupe visited Ragunda, and they heard about the road that had been named after their king. They visited the location and were quite fascinated. In 1993, an association was formed, Föreningen Chulalongkorns Minne (FCM) which took the first steps on the project. Ragunda municipality took the initiative and in 1994, a committee was formed to ensure the progress of the work. This committee consisted of representatives of Swedish and Thai interests. The construction work started in 1997.

The construction costs amounted to about 7,000,000 SEK. This does not include 3,000,000 SEK worth of decorations, such as the gilded sceptre. The project has been financed through fund-raising and sponsorship in Thailand and Sweden. The decorations have been made by the present Thai king's own craftsmen, while the rest of the building has been projected and constructed by companies in Jämtland.

The floor-surface is 75 square metres. The internal height is 7 metres (23 ft.) and the entire building, including the sceptre, rises no less than 26 metres (85 ft.) into the air. A stone wall made of Jämtlandic limestone frames the magnificent white building (each stone weighs 20 kgs or 44 lbs.). Inside the pavilion is a bronze life-size statue of King Chulalongkorn. This is the only pavilion of its kind outside Thailand. 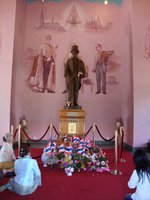 The project laid a new foundation for the development of Thai/Swedish relationships among them political, cultural and commercial. Contacts were made on government level, in national and regional administration, defence, universities, trade and commerce. Among other things, this has led to the forming of a Thai-Swedish chamber of commerce. King Chulalongkorn Day is celebrated every year the 19th of July in Ragunda.

We had open house at  SI9AM this day and showed our station for visitors who was interested in our hobby. We ran a number of contacts mainly on PSK-31. A traffic way that havn´t been activated so often.

Planning and visit by LA2HPA/Svein

This day was SM3CVM/Lars and SM3FJF/Jörgen at SI9AM. They had met to make some planning when LA2HPA/Svein Erik with XYL Solfrid arrived.

During the day there was besides planning a lot of amateur radio talk and some PSK31 QSOs was made from SI9AM.

During the day there was a lot of amateur radio chatter and a few PSK31 QSOs were driven from SI9AM.

Before the next days work with the Spiderbeam we needed to cleared the undergrowth around the antenna masts. SM3BQC/Arne, SM3LJA/Kent, SM3EFS/Lennart and SM3FJF/Jörgen spent the afternoon and evening with that.

First to arrive on Friday were SM3EFS/Lennart, SM3UQO/Björn and SM3FJF/Jörgen. They started to prepare material for Saturday's work with the Spiderbeam and for the network connection. The computers shall be used in the SAC Contest CW and SSB later in September and October.

In the evening SM5SIC/Göran arrived, he will be the team leader for the SAC contests. We worked with the computers and at midnight they finally were  connected in a network.

SM3EFS/Lennart, SM3UQU/Björn and SM3FJF/Jörgen slept over at SI9AM. Early in the morning SM3ZET/Urban came with a Skylift which we borrowed during the day. A little later SM3EAE/Lasse, SM3VRG/KG and SM3CVM/Lars arrived. SM3UQO/Björn did some mechanical work from the Skylift. Late afternoon the gang could make thumbs up when the Spiderbeamen come up at the right height. Perfect SWR-values.

What we did not have time to do this day was to connect the rotor cable. The work we done another time.

During the first hours they realized the rotor for the beams didn´t work. They decided to start early on Saturday morning with the troubleshooting process.

The connection of the computers for the contest network worked perfectly. SM3FJF/Jörgen also mounted an additional radio station and a power amplifier.

At 12:00 UTC there was four happy hams, who had have a very fun SAC contest weekend together.

In the afternoon SM3EFS/Lennart and SM3FJF/Jörgen went up to SI9AM with three drums rotor cable. Some of these rotor cables will be used when we works with the Spiderbeam next time.

Late Friday evening SM3UQO/Björn and SM3FJF/Jörgen went to Utanede to continue the work with the new rotor cable to the Spiderbeam.

On Saturday, also SM3CVM/Lars joined them. The new rotor cable for the Spiderbeam was provisionally connected until they make a decision if the rotor cable should be digged down. At the same time SM3UQO/Björn began to prepare for the coming SAC Contest on SSB.

On Sunday, October 21 SM3EFS/Lennart and SM3FJF/Jörgen went to Utanede to do an update of the 3G network for internet. They also mounted voice memory for the Micro Keyer II to the computers log application.

This Sunday morning the first snow fall in Utanede. You can see it on the pictures below.

This was the fifth time they visited SI9AM. This time also ONL741/Dirk was with them.